Greek Independence Day, national holiday celebrated annually in Greece on March 25, commemorating the start of the War of Greek Independence in 1821. It coincides with the Greek Orthodox Church’s celebration of the Annunciation to the Theotokos, when the Archangel Gabriel appeared to Mary and told her that she would bear the son of God.

Greece had been part of the Ottoman Empire since 1453. The Greek revolt was precipitated on March 25, 1821, when Bishop Germanos of Patras raised the flag of revolution over the Monastery of Agia Lavra in the Peloponnese. The cry “Freedom or death” became the motto of the revolution. The Greeks experienced early successes on the battlefield, including the capture of Athens in June 1822, but infighting ensued. By 1827 Athens and most of the Greek isles had been recaptured by the Turks.

Just as the revolution appeared to be on the verge of failure, Great Britain, France, and Russia intervened in the conflict. The Greek struggle had elicited strong sympathy in Europe, and many leading intellectuals had promoted the Greek cause, including the English poet Lord Byron. At the naval Battle of Navarino, the combined British, French, and Russian forces destroyed an Ottoman-Egyptian fleet. The revolution ended in 1829 when the Treaty of Edirne established an independent Greek state.

In celebration of Greek Independence Day, towns and villages throughout Greece hold a school flag parade, during which schoolchildren march in traditional Greek costume and carry Greek flags. There is also an armed forces parade in Athens.

The Battle of Navarino

The Ottoman Turks had conquered the Greek-controlled Byzantine empire during the 15th century, taking over its territory and its capital, Constantinople, and becoming its effective successor-state. In 1821, Greek nationalists revolted against the Ottomans, aiming to liberate ethnic Greeks from three centuries of Ottoman rule. Fighting raged for several years but by 1825, a stalemate had developed, with the Greeks unable to drive the Ottomans out of most of Greece, but the Ottomans unable to crush the revolt definitively. However, in 1825, the Sultan succeeded in breaking the stalemate. He persuaded his powerful wali (viceroy) of Egypt, Muhammad Ali Pasha, who was technically his vassal but in practice autonomous, to deploy his Western-trained and equipped army and navy against the Greeks. In return, the Sultan promised to grant the rebel heartland, the Peloponnese, as a hereditary fief to Ali’s eldest son, Ibrahim. In February 1825, Ibrahim led an expeditionary force of 16,000 into the Peloponnese, and soon overran its western part; he failed, however, to take the eastern section, where the rebel government was based (at Nafplion).

The Greek revolutionaries remained defiant, and appointed experienced philhellenic British officers at the head of the army and fleet: Maj Sir Richard Church (land) and Lord Cochrane (sea). By this time however, the Greek provisional government’s land and sea forces were far inferior to those of the Ottomans and Egyptians: in 1827, Greek regular troops numbered less than 5,000, compared to 25,000 Ottomans in central Greece and 15,000 Egyptians in the Peloponnese. Also, the Greek government was virtually bankrupt. Many of the key fortresses on what little territory it controlled were in Ottoman hands. It seemed only a matter of time before the Greeks were forced to capitulate.

At this critical juncture, the Greek cause was rescued by the decision of three Great Powers—Great Britain, France and Russia—to intervene jointly in the conflict.

The War of Independence in Crete

Cretan participation in the revolution was extensive, but it failed to achieve liberation from Turkish rule because of Egyptian intervention. Crete had a long history of resisting Turkish rule, exemplified by the folk hero Daskalogiannis, who was killed while fighting the Turks. In 1821, an uprising by Christians was met with a fierce response from the Ottoman authorities and the execution of several bishops, regarded as ringleaders.

Despite the Turkish reaction the rebellion persisted, and thus Sultan Mahmud II (r. 1808–1839) was forced to seek the aid of Muhammad Ali of Egypt, trying to lure him with the pashalik of Crete. On 28 May 1822, an Egyptian fleet of 30 warships and 84 transports arrived at Souda Bay led by Hasan Pasha, Mehmet Ali’s son-in-law; he was tasked with ending the rebellion and did not waste any time in the burning of villages throughout Crete.

After Hasan’s accidental death in February 1823, another son-in-law of Muhammad Ali of Egypt, Hussein Bey, led a well-organised and well-armed joint Turkish-Egyptian force of 12,000 soldiers with the support of artillery and cavalry. On 22 June 1823, Emmanouil Tombazis, appointed Commissioner of Crete by the Greek revolutionary government, held the Convention of Arcoudaina in an attempt to reconcile the factions of local captains and unite them against the common threat. He then gathered 3,000 men in Gergeri to face Hussein, but the Cretans were defeated by the much larger and better-organised force, and lost 300 men at the battle of Amourgelles on 20 August 1823. By the spring of 1824, Hussein had managed to limit the Cretan resistance to just a few mountain enclaves.

Towards the summer of 1825, a body of three to four hundred Cretans, who had fought with other Greeks in the Peloponnese, arrived in Crete and revitalized the Cretan insurgency (the so-called “Gramvousa period”). On 9 August 1825, led by Dimitrios Kallergis and Emmanouil Antoniadis, this group of Cretans captured the fort at Gramvousa and other insurgents captured the fort at Kissamos, and attempted to spread the insurgency further afield.

Although the Ottomans did not manage to retake the forts, they were successful in blocking the spread of the insurgency to the island’s western provinces. The insurgents were besieged in Gramvousa for more than two years and they had to resort to piracy to survive. Gramvousa became a hive of piratical activity that greatly affected Turkish–Egyptian and European shipping in the region. During that period the population of Gramvousa became organised and built a school and a church dedicated to the Panagia i Kleftrina (“Our Lady the piratess”)—St Mary as the patron of the klephts.

In January 1828, the Epirote Hatzimichalis Dalianis landed in Crete with 700 men and in the following March took possession of Frangokastello, a castle in the Sfakia region. Soon the local Ottoman ruler, Mustafa Naili Pasha, attacked Frangokastello with an army of 8,000 men. The castle’s defence was doomed after a seven-day siege and Dalianis perished along with 385 men.During 1828, Kapodistrias sent Mavrocordatos with British and French fleets to Crete to deal with the klephts and the pirates. This expedition resulted in the destruction of all pirate ships at Gramvousa and the fort came under British command.

The Greek Independence War through art 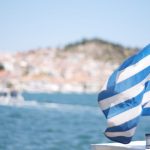 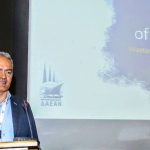